It was evening, when Geet woke up from her sweet sleep, feeling his scent lingering on her body, she blushed furiously , taking bath she came out only to notice silver packet there with red rose and small note.

She walked upto it , taking the note in her hand, she read it,

For my wife, she took the rose in her hand, kissed the petals blushing along side and opened the packet.

She gasp seeing the sari , she pulled out the material feeling excited as it was gifted by her hubby so sweetly.

She quickly got ready as she read the note, feeling anxious , scare, restless but all the more excited on going on her first date with Maan.

She blushed seeing her reflection in the mirror.

Take care, dear and all the best.. dadi blessed her kissing her forehead lovingly, Geet blushed taking her leave.

Geet sat inside car with thudding heart, feeling uneasy to just go with the driver.

But her all fears were vanishes soon as she felt his hands snaking on to her.she was startled, looked up to find him seating there near her, as it was dark in the car.

Maan.. she hugs him tight feeling relax on finding him near her.

How can I left my sweetheart alone. He whispered huskily in her ear, kissing her cheek. Geet smiled burying herself more in her husband’s warmth.

Maan smiled seeing his wife’s antics, he engulf her close to his chest , giving her warmth.

It took hours to reach the destination till Geet again fallen into sleep in his arms reasoning her pregnancy.

They reach the destination, while he walked her out, Geet was left awe with the beauty of nature that stood before her eyes enchanted.

He had intentionally book the place in the outskirts of Delhi, to spend some quality time with his wifey and let her to take fresh air of outside.

As the cuisine was laid, her eyes shine to see the dishes of her favorite food. But as she took the bite , she didn’t like the taste,

Maan asked seeing her making faces, she pouted then her eyes fall into his dish that contained Italian..her mouth watered, Maan watched her intently and get to know about her mood swings, he smile and offered her one spoon full from his plate, Geet took it in her mouth, feeling content with the taste, her eyes closed enjoying the taste.

Maan shook his head seeing her antics and continue to feed her lovingly.

Geet smile back at him, and fed him back.

Both finished the dinner having sweet dishes that includes her fav choco ice cream.

Geet was feeling so alive and fresh after a while now with this date thing.

She hold onto him, resting her head on his shoulder, while he has his arms holding her protectively close.

Both continue to swing on the soft music. The soft wind was reading them making all couples present there comfy , the whole air around was soft , romantic and giving warmth with the nature surrounding them.

Geet was first time experiencing this, she was awe looking around, people were lost in their own world, their own partner , no poking noses on others matters.

She closed her eyes feeling peace there in his arms, while his fingers makes pattern on her bare waist.

She kissed on his neck, feeling his sweet touches, her whole started to squirm to be loved by him again. Her hold tighten on his back , crushing his shirt.

Maan get to know her each moves, he was also in the same boat as his wife.

Shall we go back!?

Hmm.. I don’t want to.. it is so nice here.. she confessed still with her close eyes , resting her head on his chest, holding him tight.

Maan smiled , he was glad for he was successful with his plans today. She was happy and that thing makes him satisfied.

We will come again..

I want to be with you.. she confessed looking into his eyes.

I will make sure if it!! He cups her face, overwhelmed to listen her.

He kissed her on her lips sealing the promise while keeping in his mind to fulfill her promise.

Both reach back at home late hours, Geet was going to changed when he stopped her, and took out one nighty from the cupboard.

Geet was confused when he handed her the cloth, it was soft silky short material.

This is for my sweetheart!! He whispered huskily unpinning her sari from her shoulder, from behind.

Geet blushed crimson red, seeing it, he kissed her red cheeks one by one , his hands cups her bosoms leaving her breathless, his face buried in the crook of her neck giving her hard smooches, his beard rubs if her soft skin making her moan out.

She at once pushed him away, takes faster steps towards the washroom getting to know his intentions.

Maan smirk seeing her reaction, he changed into his nice dress in the room and sat on the bed, checking few mails on the phone.

After a while the door of washroom was open making him look up at the source.

Her one pretty feet was out making him hold his breath, then second , then she walk out with her head downwards, arms cross on her chest as if trying to hide her.

Maan got up at once throwing his cell on the table.

Geet flinch with a voice and looked up to see him taking steps towards her . Her breath hitch in her throat, she stole few glances at him then again looking down, waiting for him to reach near her , though her heart did a flip flop fearing from his each next step.

Maan took in her beautiful view, he just continue to stared her standing near her then, with one swift move he took her in his arms making her gasp.

Her soft bare arms cage around his neck holding him tight, she looked up at his face, he was looking at her only.

Maan walked upto the bed and put her down softly like a flower.

Geet was blushing like hell, she took the edge of the blanket to wrap herself into but he hold it in his hands stopping her.she looked at him, his eyes were so dark with desires boring into her. He dare her to hide herself from him. listening to him, her hold on the blanket and just laid there waiting for his move.

Maan switch off the lights leaving table lamp on for his sweetheart.

Geet gasp feeling him hovering on to her.

My sweetheart is looking beautiful!! He whispered huskily on her face, 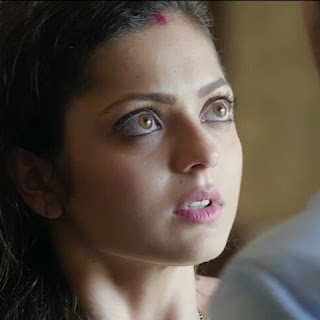 she looked at him, lost in his spell, her lips quivered, while he took them in his mouth kissing her slow and passionate.

His hands roam on her body all over feeling her femininity.

She hold on to him, feeling thrill to hear his praises. His hands went down on her thighs rubbing her there, she moaned in his mouth feeling wet.

Breaking the kiss, he pushed down the straps from her shoulders showering wet kisses there.

You should wear those nighties at night, before I came home!..

he whispered , Geet was though lost in his kisses, heard him and her cheeks burn in shyness. She never knew when he bought it but she was ready to wear them for him when he liked her to see into it. And it was only the matter of night.

I will, Maan.. she cups his cheek looking to his eyes. Maan kissed her again this time opening the chain of her dress, he pushed it down and threw them somewhere on the floor.

His eyes turned dark seeing the sight of her all nude only for him.

Next Geet was lost in her husband’s love as he continues to touched and kiss her everywhere on her body leaving no place, biting and wet with his saliva.

He make love to her till she felt tired and went to sleep in his arms just like that.

He peck her forehead affectionately, sliding her hairs from her face, he tuck them behind and looked at her glowing face for a while.

Taking her in his arms, he went to sleep soon, having her closed to his heart.