These shrubs of henna have (give off) a unique color

If You get colored by it once, it won’t come off in Your whole lifetime

Of whose name should I put/decorate henna on me

Radha belongs only to Lord Krishna

Geet  sat in the middle of girls, deck up sweetly in blood red color sari, with straps blouse, revealing her beautiful arms for mehendi.

The ladies were singing the songs, to add more spice to the program, but it burns the heart Of Geet , listening to the lyrics which describing the pain of her bruise heart.

Girls were giggling around her, some were of Maya’s friends daughters high society girls, teasing her, mocking her in their own style that no one could get it, seeing her upset mood, but no one knows the ocean of the pain hidden inside her small heart. she would have given them back some other day, if she was in her right senses, she has lost it today, her all mind and heart was somewhere else, waiting for him.

nik was trying to cheer her up, but no use, she was also upset to see her dear friend like this, just then, whole hall was silent seeing the would be groom entry, girls drools on him seeing his hot looks, as he comes to apply mehendi just for his bride, all girls were going gaga over him being jealous of Geet for stealing the hot champ , except the one and only Geet Handa, who did not give a damn to him, not even one look, she was only lost in the thoughts of her Bodyguard.

Insider her veil, Radha is blushing
Now they’ll be united, there’s a hope of that

Radha belongs only to Lord Krishna

She was just hoping after hopes, that he will come for her, definitely like always, for she couldn’t able to live without him, her heart is only beating for him, it will stop otherwise, if he wouldn’t make it on time.

The words slips from her mouth making everyone gasps around, there start whispering and murmuring taking everyone’s attention around, Maya makes her way towards her daughter, her heart cried to see her like a broken doll, there was no emotions on her face, just blank.

NO! It’s MAAN, do you hear me, it’s Maan, M- A-A-N, she clarified again turning hyper now, she shouted, MAANN. write it on my palms, she show her palm to the designer who by now scared , seeing Geet’s anger.

Karan at once rushed forward, what the hell, are you talking about Geet? have you lost it? karan couldn’t control his rage, he barge towards her, yes, I have lost it, lost to Maan,

She pointed at her heart, screaming on his face.

and she come back to her senses, feeling nik shaking her a bit to take her attention, she realized, she was just dreaming about that fiasco, NO!! her mind screams, as she looks around, the atmosphere was normal, she sigh painfully, for she couldn’t make her mother to bend her head in shame in front of the people, there was live telecast of her each marriage rituals, and program. she couldn’t put her mother in trouble because of her, her whole hard work form the beginning, will go in drain, which she never want, but she could just wait for her love, if he could by himself takes her away from this now. it was killing her every passing second, the thought of becoming someone ELSE, it was not better than a slow poison.

The designer was going to draw karan’s name on her palm which niks had told her, after that niks has gone away leaving her, as she was called by other ladies, she got the right chance as she found herself alone with the designer, MAAN!! she whisper close to her face, bending little forward, so that no one could hear her, Designer was shock now, Geet pleaded her silently, with her pained eyes that she got to know the matter of love here, she smiled softly understanding her and does as per her wish, hiding the name in the design.

Maan watched her blank face, devoid of any emotions, as it was live telecast, he couldn’t held himself back from watching her once.  he couldn’t believe she was getting married to that Karan, he knew her she couldn’t have agree unless and until, its her mother’s wish, for she loved her mother beyond, more than him, he guess painfully.

Lagta Hain Ke Vrindavan Mein Ab Na Raas Rachegi
It seems that Raas won’t be played in Vrindavan anymore
(Raas is a form of Indian folk dance belonging to the state of Gujarat.
Here Raas also means the dance of destiny which is controlled by Hindu deity Lord Krishna, Vrindavan is a town in North India where Lord Krishna spent his childhood days) 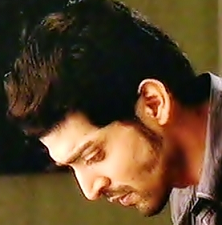 He sighs painfully, feeling miserable, don’t know what she would do without him. his dad called him for lunch, which he denied straightway, he was doing like this form the time he comes back from the hospital. he knew Maan was upset with him, but he was helpless,  helpless father couldn’t cure his own child’s pain.
Ho… Prem Agan Kuch, Aisi Lagi Hain
Sirf Akeli, Radha Jali Hai

Geet looked at her mehendi filled hands , first time after a week there was tears in her eyes, tears of happiness, wet smile spared across her face, adoring her mehendi, his name, her maan’s name. she couldn’t stop admiring her own menendi design, where his name was hidden somewhere, hidden from the world, even himself, but from her, she have it crave in her heart, just like on her hands now.

she slowly got up with her deck up hands, started to walk upstairs slowly lost in her own world, world of Maan, that she could not even hear anyone’s voice behind her calling her NAME, Maya looks at her daughter’s condition, and her heart flip flop giving her signals that something is terribly wrong with her daughter today.

before she could followed her behind, she was held back with her associates, few friends, but her attention was on only on the stairs, from where her daughter went away to her room.

Geet cried, once rushing inside her room, she was turning crazy without him, but he was nowhere to be seen, even he did not makes it to her , to help her with the sari, few girls makes her wear it, but she wanted him, wanted to wear it from his hands, she thought looking her reflection in the mirror,

She was looking all together different today, in sari with those few jewels, she hated it, she angrily removed her all jewelries, throwing them on the dressing table, she tried to find something, and got the desire thing.

she couldn’t bear it more, couldn’t bear the pain of separation, she wanted killed herself, so that this pain will be also over, she thought crazily eyeing the knife in her hand, she put it on her wrist, but stop herself eyeing it, her mind and heart both screams now to her for NO!!

NO!! she couldn’t do it, what will happened to her mother, her Maan, if she die, what matters to her mother, today also she never comes to her to sooth her pain, nothing will affect her, she will sad for a while but again will got back to her regular routine, she thought with a mocking smile on her face.

But Maan?? what about him, he will die without her, really?? her mind mocks at her, really this thing affect him, if he really cares for her, then he would have come here long back to takes her away, just after few days of there departure.

Geet put the knife on her wrist, but the thought itself shudders her, she shiver , just with the feeling, how would she do it, it will pained her so much, she cried like a small girl now, no, she can’t .. but she have to give them the same pain back which she is feeling now, she would teach good lesson to her Mother and Maan, she thought just poking the knife in her soft skin, just small dot of blood appears.

Geet, her eyes widen in terror, no.. no.. I cant do it.. its pain.. GOD!!. she jump on her place,blowing the  wound, which was in between her mehendi.

she threw that knife  aside, being angry on it for giving her even small wound, na baba, why should I give myself this pain for those who doesn’t care for me. she pouted glaring the knife angrily.. you just stay away from me.

I am here babe, to help you!

She heard his voice and her eyes widen in shock as she looked up to see the person whom she had least expected.

14 thoughts on “HER POSSESSIVE BODYGUARD PART 58”