Geet was lost looking at MSK’s photo when her phone rang disturbing her lost state. She picks it up and soon her face turns horrified hearing the other side sexy voice.

Darling, I will arrive at the Airport at 4.30 pm. Remember to pick me up.

Geet sigh and replied the person that she will be there before time and cut it .

At Airport, Geet was waiting for her friend before time as per the instruction when she heard that sexy voice calling her,

Geet turn to see the the girl walking towards her with sexy moves, she had worn her usual sexy revealing dress attracting all attention, people around gasp seeing her, men and boys were ogling her shamelessly without a blink with wide eyes and mouthwatering expressions.

The girl straight way grasp her dear friend by her neck hanging on to her, don’t you remember me anymore, Geet?

Sasha, why do you still dress up so sexy here?

Geet asked instead though nervous herself seeing her dressing and the way people were gawking her shamelessly. 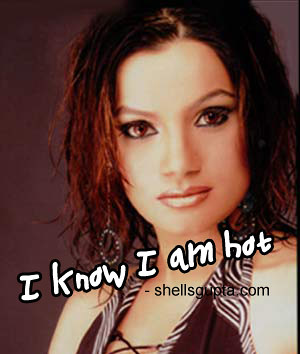 Sasha turns irritated hearing her and she turns her attention towards the crowd which was there because to look at her, what are you looking at? Do you want to want to keep your eyes safe? She shouted at the people around making Geet startle, she was hell scared with her anger.

Okay.. Okay… enough!! let’s go home.. i had bake cake for you. Geet tried to change her mood as sasha walked forward turning upset and furious.

I know, you are the best. Let’s go!! Saying so sasha walked out towards her awaiting car, and both zoom out towards Geet’s house.

Wow, Geet, your home is sooo pretty! Exclaim Sasha as soon as she entered in her house, obviously her house was beautiful just like she herself.

Jo bhi tumse shadi karega in future, he will be so lucky! She added making Geet nervous a bit listening her , not soon enough her eyes caught the photo frame placed on the table as she was walking in the entire house to have a good look of it.

So this is Sameer? Sasha asked looking at his cheerful pic in the frame, Geet was little shy, she replied softly.. He is the one..He said that our wedding will be perfect.

After a while, both sat down in the living room to have a talk while sasha was munching on her favorite cake off course made by Geet.

What does he do? Maine kabhi use nahi dekha , I never seen you guys talking even on the phone.. He never called you.. Did he??

Geet was silent, not knowing what to answer to that question,, she with her head down little shy..little nervous, replied her.

He works at a private company as an accountant. We don’t talk very often and he doesn’t want me to distract him at work. She was sounding little sad talking about this which Sasha ignore as she was really enjoying her favorite cake.

Wow!! This cake is so delicious, Geet! I want some more tomorrow. She demanded cheering Geet’s sad mood .

Hee…he..he.. sasha.. You are so cute. Like a rabbit.. Geet giggled making sasha laughs as well..

Both friends were lost in there own world when her phone rang Geet got up to see it, as she thought it must be Sameer but to her astonishment it’s unknown number as she opened the message and read it ..

Why are you up till late? You should go to bed early, it’s good for you, Good night.

Geet wonder who is it. She was startle, shock and little surprise, keeping her little fear aside she look out of the windows of her home peeking out her head through the curtains to have a look of her stalker

when again her phone rang indicating another message.

Sasha had already left for her room biding her good night.

Geet walk back to take her phone in her hands and opened the msg again. She was sweating badly now fearing from this stalker,

Don’t worry, you are safe and save my number.. There was number below then.. and then his name.. MSK

Geet was flabbergasted, shock.. how is it . HIM??

He is celebrity and texting me?? Is he bored?? She thought pouting her lips cutely, really wonder what make him to do so..

On the other hand MSK was typing to his sweetheart lost in the phone.. it was not difficult for him to get her number and her whereabouts..

What are you waiting for? If you don’t add me, I am going to sneak into your room. He texted with a little smirk playing on his M shape lips, loving to teased his sweetheart.

Her face was worth watching.. as she turn surprised again.. With pouting her lips.. Little angry.. 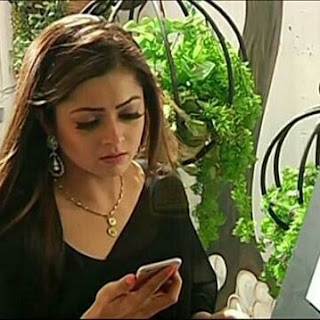 He is threatening me?? Can’t he be a gentleman?? She thought making faces. Saving his number she sat still nervous with the thought of talking with him.. such a big shot.. She felt Goosebumps in her whole body, felt mushy reminding their moments in his mansion.. he was so caring.. she don’t know why she was feeling this.

What should we talk? This i so awkward.. she sat waiting for his next msg.

Here Maan was hell confused as what to talk and how to with his sweetheart. He was clueless as never done it before (just like me

Ermm… adi .. How can I talk with a girl without feeling awkward! Finally he asked from him leaving a frustrated sigh..

Adi was now sweating badly with this weird question form his boss.. First time ever in his life

Are you chatting with Miss Geet?? You could care for her a bit more.. said adi wiping off his sweat with hanky, Maan make an irritating face listening him.. he was silent for a while before he shout on him almost making Adi squeak back hearing his scream.

Forget it. It’s no use asking a geek guy like you.

Oh… Adi was so hurt and sad listening his boss.. He pouted sadly whereas Maan was lost in his cell giving his back to Adi, he was seating on the dining table.

What should I say to her?? Maan was still thinking.. Making Geet wait for his next msg.. she really wonder now what makes him this much late to just initiate the talk. She got into her bed and took a novel to read when her phone beep with a next msg.. Obviously from him.

Hey disaster queen, are you sleeping??

Reading it Geet fumed, pouted her lips cutely… calling me Disaster Queen?? He is so rude..

I am not in bed yet, icey, why are you awake till now??

As soon as her reply came, he jump out of his chair, pushing the chair back and scream in excitement startling poor Adi..

Adi was sweetly surprised to see his boss laughing whole heartily looking so handsome as he never seen him before this much happy.

Sir, you look really handsome when your laughing as well.. he said out not able to keep his happiness inside seeing him this much happy today.

Maan replied him nonchalantly lost in his cell texting back to Geet with small smile still lingering on his lips.

Adi just laugh out his silly laugh thinking.. Doesn’t even admit that he laughed. There is still a smile on his face now.. he thought watching his smiling and happy face as he continue to text Geet.

Geet was almost dozing to sleep now when her phone beep breaking her sleep, she was irritated now and opened the msg in with her sleepy eyes.

It’s not good for you to sleep so late..

She slap her forehead making faces reading his msg.. He himself was not letting her sleep.. babaji.. she again pouted her lips feeling sleepy .. how can he blame her..but he started talking to her.. she was little happy to discover this fact and text him back.

I am talking to you, so I can’t sleep.

Oh.. maan just now realized what he was doing, she must be sleepy and he is making her awake. He frown before texting her back.

Are you sleepy? If you are sleepy, you can sleep now.

Geet smiled reading it, her heart felt at warm talking with him and she replied him not liking to see his saddy face.. she felt it.. He was not willing to break the chatting.. wanted to talk with her.

I am not sleepy. It’s alright you can talk with me..

Maan turns happy again reading her text but he was really clueless about what should he talk about and he texted her asking her directly.

Sure.. let’s talk then. What should we talk but..

Geet gulp down the water in one go reading the msg as she was drinking the glass of water that time.

Seriously?? MSK.. if you chat like this, this chat will end quickly.. She thought, doesn’t know herself why she wanted to chat with him late night.. Why she wasn’t wiling closed the chat.

She thought and thought about the topic to start the chat with him by herself when she reminded about that red thing he had asked yesterday.

Hmm..it’s good time to ask about that red thing which he was asking me yesterday.. she thought smiling cheekily.

Maan read next msg from her.. Why were you asking me yesterday about that red thing?? What is it?

Maan stop for a while thinking on to if he tell her or not.. and what to tell her..finally thinking for a while he replied.

Geet was awe reading it.. She felt little jealous.. Little surprised reading him, her eyes widen. she actually forgot about it must belongs to her as he had asked her yesterday.

Geet.. I have left you for so many years, are you mad at me? Maan thought feeling miserable thinking she doesn’t remember anything or pretending to hurt him as she might be angry on him.

He..he… what kind of girl would Dusht Danav like you fall for?

Maan read her msg and  smile sadly reading her that dusht danav… he went into his dreamland.. his past.. their beautiful past..

We met when I was studying in hoshiyarpur and I was just a student then..

Precap : Red Roses for his Rose!!

It had come out as long update… so I want long and lots of comments and also 65 likes to this one. Only

After that I will give next update… till then wait guys..