Geetakshi turn around only to gasp in shock, where did he went . he was here ? did not he ? her whole fill with sweat in ac room , she turn hyper for she could still feel him in the air nearby.

What is happening with her ? she question herself while two pair of eyes watched her amusingly, there was evil smirk playing on his lips.

Next moment she gasp so loudly, seeing him entering in her room suddenly.

What happened, Geetakshi ? wasn’t you expecting me ? his question left her more dazzle.

Mr.khurana , wasn’t there behind me , sometime before ? she asked unsure gawking his face expressions keenly.

I just come now to meet you , and seems like you doesn’t like it ? he utter keeping his emotions in control and and turn to go when she suddenly hold his wrist stopping him.

It’s not like that Mr. khurana . I was just.. leave it she try to clarify him not liking his distance.

Maan turn around to see her face, she looks so worried , he was happy with her effort to stop him but what is the thing bothering her, why she was looking scared at the time of his sudden entry.

What’s the matter, Geetakshi ? he asked coming face to face with her .she turn uneasy , should I tell him or he will think of me become crazy.

Woh.. it’s nothing , Mr. khurana. Everything is fine now. She try to look convince but he did not like her hiding things form him , beside he want to know her worries, he want to help her, don’t know why , this sudden urge when he know its only attraction that what he felt now for her.

Nothing was fine , when I entered at that moment you were looking scare , tell me , he demanded holding her shoulders.

I felt you , she blurted then looked at his face , seeing him looking at her weirdly she clarify,

I felt like you are there behind me sometime before  you really comes. She answer meekly without looking at his face, while her cheeks actually colored pink.

Maan left her startle hearing her, he actually blushed slightly and looked at her face.

But you come just now , then , she drag looking at him worried.

Maan looked at her getting worried, he hold her shoulders again bringing her closer softly.

Leave it Geetakshi, you shouldn’t worry for this small things. he softly pulled her more close and she without any inhibitions went in to his arms wrapping her arms on his back. 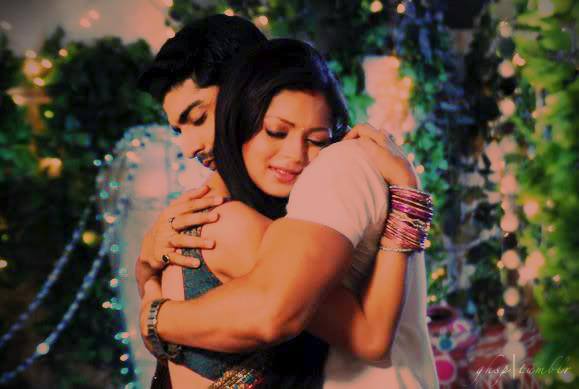 Both remain in a hug for a long time feeling each other. Her soft palms crush his shirt in a fist fetching solace in his arms. While he roam his  hands freely on her bare back feeling her.

Maaann. She moan in his arms feeling his lips nipping her soft skin of neck as he buried his face there.

Geet pulled him more  close holding his back of hairs in her fist.

There small romance broke with the knock on the door. Both parted, Geet was so embarrassed, she calmed herself and asked the person to come in.

It was spot boy who inform her about directors call for her for the shooting.

Geet nods and he left not before giving one last glance at maan who glared at him back making him run away form the room.

She  was searching him from the long time now, but he was nowhere to be seen, she finally turn frustrated and turn to go, when he pulled her all of a sudden coming from behind .

I desire for you

I keep searching for you

I’m in love with you

with a sudden pull she bang on his chest hard , looking up she could see madness in his eyes for her that left her shiver , she was about to pull out of his arms when he jerk her closer indicating her to don’t go

After being in love with me in this way

You don’t change yourself

Promise me that my beloved

geet lip sing the lines of song binding her arms around his neck . Suddenly she was lost in a moment first time ever as she saw his face in him .

she pulled herself more closed to him, Rohit looks startle , surprise with her advance , as that was never in that scene, she have to pushed him away with mischievousness, that was the script .

he was gentlemen that turn his face towards director who was himself lost in the scene ,he thought to go on with the scene that was played by Geetakshi as she do always extraordinary .

but there was he burning like a volcano , it was getting on his nerves now to see her doing those close scenes with Rohit just in front of his own eyes.

CUT IT DAMN… IT. He shouted furiously without having more control on himself

Geet was pulled out of her trance, she looks startle, she managed to gain control on herself.

Rohit looks surprise with MSK’s voice so as everyone. maan just then realized what blunder he done, but he was MSK after all, he knew how to control the situation.

As per I know the scene has finished , ?  Maan asked in his authority tone from Dhanraj who gives him short nod..

Rohit also gives curt nod to their conversation and looks at Geet , who was hiding her embarrassment but looking so calm as if nothing happened.

Rohit kept looking at her to know any change of emotions on her face but there was no hint.

He actually felt some emotions lurking inside his heart with her advance today.

Excusing himself he went from there , soon it was pack up and end of the day.

Geetakshi went to changing room to get her cloths change, as she step inside two strong arms caged her in his arms.

She gasp with her wide eyes opened, she wanted to scream but seeing the person she couldn’t muster the courage.

What was that ? his harsh words drum hard on her ears.

She tried to control her rage breaths and looks at his fuming red face.

She put her shivering palm on his stubble cheek.

Don’t play with me . he bark angrily on her face making her upset. She turn sad and tried to move but he pulled her harshly in his arms.

The scene was ended there, why the hell you pulled him.

He was so harsh with his words even that made her eyes moisten, but he was straightforward no hide and seek.

You are rude. She mumble meeting his furious glare.

Yes I am  but you make me

Spill it , he shouted making her startle

Leave me.. she started to struggle in his hard hold

Geet was now caught off , how she would told him that she saw him in Rohit place, how ?? its not possible, she cant just gives him hint when she herself is unsure.

It was just the scene MSK. Why are you going hyper? She replied hiding the real reason.

The scene was ended there , I am talking about aftermaths, don’t make me repeat again.  He was so furious now seeing her denial that his tight hold started to gives her pain.

Ahh.. she cried out finally bearing no more. Few tears rolled down on her cheeks making him aware of her condition.

Maan left her suddenly realizing what he was doing in his anger. Geet rushed out of his hold and went away to get her bag as she was no more in changing mood now.

Maan tried to control his rage closing his eyes and bang hard his hand on the wall just when she was about to pass him.

Maann. She shouted taking his hand in her own.

He looks at her surprised, just sometime before she was upset with him for his rude behavior but now taking care of his hand, she blew soft air on his bruise palm.

You are crazy. She mumble applying ointment on his palm.

Just for you I am going crazy day by day.. Minute by minute , Seconds by seconds..

THE SONG INCLUDED IN THE FF HAS LINK TO STORY, YOU CAN UNDERSTAND READING THE LINES , ALSO WITH COLOR COATING . DON’T SKIP IT , THERE IS ALSO ENGLISH MEANING BELOW EACH STANZA.